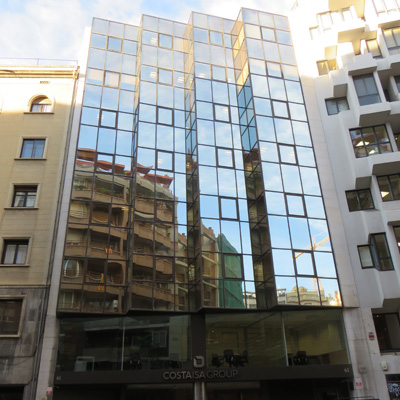 Costaisa Group Costaisa Group opens corporate offices in the neighbourhood of Gràcia on Avinguda del Príncep d'Asturies, 61. With a capacity of 300 people, the new 4,000-m2 building is distributed into eight floors, including an auditorium, and training and meeting rooms equipped with the most cutting-edge equipment. Costaisa Group will also continue to operate from its corporate headquarters at Pau Alcover, where around 100 employees are based.

"We wanted to unite forces, merging most of our companies in the same head office with the aim of boosting our projection as a business group in technology, engineering and training, which are the areas of excellence of our companies" said Julián Casado, Managing Director of the Group. He added, "we have chosen a building in which we can create open and modern workspaces that will boost teamwork and creativity".

This marks the beginning of a new era that will reinforce the company's projection as a business group of benchmark companies in technology (Costaisa, Fihoca and Sapas), engineering (Sisemed and Datapro) and training (Onplus and Bdnplus).