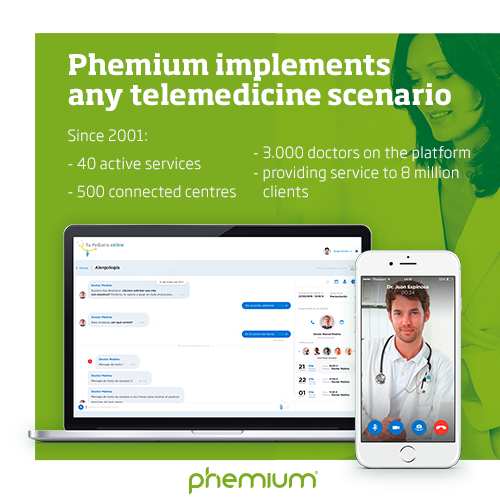 Costaisa and Tu Pediatra Online exhibited their new products once more at the Mobile World Congress, the mobile technology tradeshow which is an international benchmark and unites the leading manufacturers and implementers of solutions with this technology in Barcelona.

Over 100,000 participants will attend this year and Barcelona will once again be positioned as the mobile capital during the four-day congress from 27th February to 2nd March. Leading manufacturers will exhibit their commitments on mobile terminals once again, but their offer on artificial intelligence, drones, Internet of things, robotics, virtual reality, 5G, digital identity and security solutions will have a special role this year.

In the last edition, the exhibition space gathered more than 2,200 companies and this year, Phemium will once again have a space alongside Tu Pediatra Online, which uses our telemedicine platform Phemium and an associated App to carry out paediatric consultations via video call, online chat and/or email, answered by a team of collaborating paediatricians.

Since last year, Costaisa has strengthened its position as a technological benchmark for the transition from traditional business models to mobile environments: Grupa Luxmed (Poland), Ver2 (Dubai), Asepeyo (Spain), Sanitas (Spain) and University of Navarra (Spain), are some of the key projects in 2016.