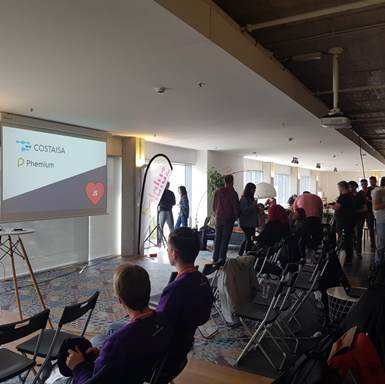 Costaisa participated in the Frontend Love Barcelona, ​​the second stop of Frontend Love & Vuejs Roadtrip, a conference cycle of the frontend specialised community in Vuejs that travels across Europe. It is an exclusive event for the Frontend Developers community, which has gathered more than 150 experts from all around the world to share experiences and consider new challenges.

The first edition took place on February in Amsterdam, a couple of weeks ago it was succeeded by Paris and Berlin will be added in December of this year.

VueJS is a framework that is gaining followers to join those who are referents in the market, such as ReactJS, Angular and EmberJS. VueJS has also demonstrated its robustness and scalability, and it has the peculiarity of having a pronounced learning curve, where in a short time, you learn to take advantage of the platform.

In addition, it can be used progressively and include the parts of the framework that you want as you progress through the project. VueJS is modularized in different well-defined libraries that allow adding functionality at the moment they are needed.